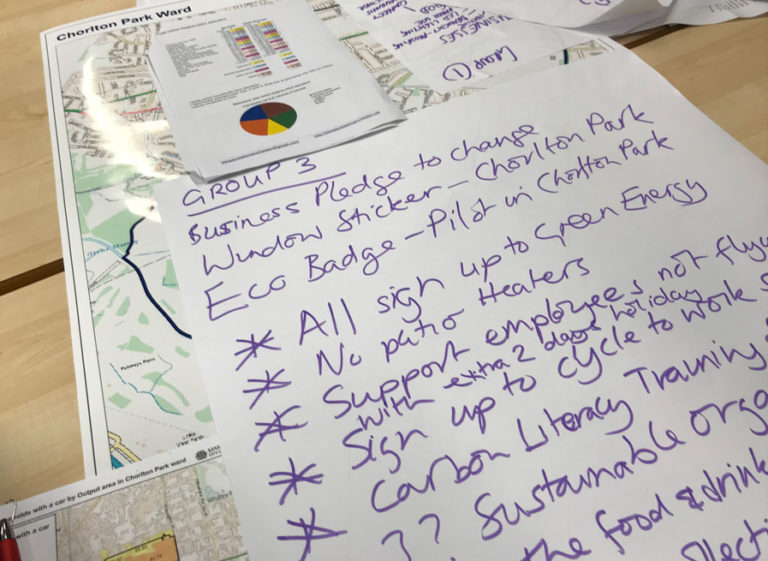 Environmentalism begins at home – and we can all do something. Linsey Parkinson talks to ward councillors Mandie Shilton Godwin and Joanna Midgley about a cleaner, greener way forward for Chorlton Park.

In November, Mandie, Joanna and their colleague, Cllr Dave Rawson, hosted Chorlton Park’s first Environmental Emergency Action Workshop at Chorlton High. More than 40 people came along (not bad for a cold winter’s night), to learn about what’s being done and consider what might happen next.

“We wanted to explore ideas about what we could do as a community,” explains Mandie. “The Council formally declared a climate emergency in July, which means we will do whatever we can to reduce emissions and set a more ambitious date for the city’s carbon-neutral target (currently 2038).

“We believe this is the most important issue of our time and it’s important that we involve everyone in the choices that we make – especially those people whose voices aren’t always heard. We’re working as part of a large city-region, but it’s vital that we hear from as many of our ward residents as possible.”

After brief introductory talks from representatives of various projects (including Southway Housing; the NHS Local Care Organisation, and Chorlton’s brilliant make-do-and-menders, Stitched Up), workshop participants discussed a number of themes – traffic and transport; nature and environment; homes and buildings; local business; reducing, reusing and recycling – and how best to spread the word about what can be done.

“We got a really clear insight into what’s important to local residents,” adds Joanna. “And while we can’t fix everything that was suggested – a good deal of environmental policy is set by national, rather than local, government – we had lots of great ideas submitted.

We’re sorting them into what we can do straight away at local level, what we can influence at regional level and what we might lobby for at national level.”

There’s lots happening in schools, and not just in terms of education. Chorlton High has planted 400 new trees and Barlow Hall School is about to plant its own orchard. The Friends of Chorlton Park (which boasts more than 650 trees) has funding for improvements and is focusing on trees. A ward-wide street tree audit is being undertaken too, so if you see trees that are missing or in need of attention – or you’d like some street trees – contact the councillors. If you and your neighbours can manage a little hand-weeding to keep pavements safe and clear, you can apply for your street to become a weedkiller-free zone.

This isn’t only about nature, however: it’s also about how communities can work better together to help each other. Groups like Men in Sheds already contribute DIY, bike repairs and practical support. There’s a plan to create a virtual Library of Things, where you can borrow tools; an Hourbank, where you can swap your time and skills for someone else’s, and a Repair Cafe, where things get a new lease of life instead of a new life of landfill.

A better, safer cycling infrastructure is on the cards with the new cycleway (work on the Chorlton Park stretch will begin some time in the spring), while Play Street projects are springing up across the ward – close the road to traffic, so the kids can enjoy some old-school playing out. There are calls for curbs on fossil fuel use by local business, additional vehicle charging points and much more.

“The outcome of the project will be a new Chorlton Park Climate Action Plan,” says Mandie, “which will be a real statement of intent in terms of improving and protecting our neighbourhood and city.”

Want to take part in the debate? The next meeting takes place 7-9pm on 30 January at Barlow Moor Community Association. Everyone is welcome (though you must live or work in Chorlton Park ward).

For further information about anything here, contact Mandie  or Joanna.

This article originally appeared in Open Up Chorlton magazine